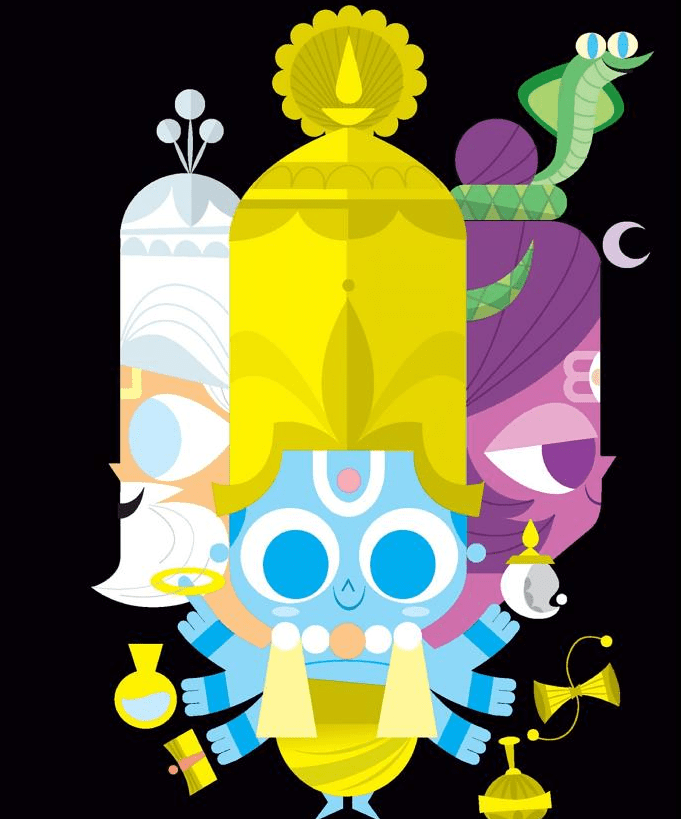 “Mythology is not a lie, mythology is poetry, it is metaphorical”.
― Joseph Campbell

Whenever I begin to recount my tale of how I was enraptured by Indian mythology, I feel the need to stress on a few learnings. I was 13 and my aunt shamed me for not knowing any mythological stories. I vowed that I didn’t need this knowledge of mythology to get through life and I would never learn it, that was a 13-year-old talking out of hurt and spite. But like all things in life, I believe that instinct will lead the way and it has – I grew up and so did my reading, at present, I might be in the most diverse reading era of my lifetime. I still have remnants of wonder that lead me into semi fantastical books, the thirst to know more about characters, which has me rooted deeply in fiction. A love for non-fiction and the truths of our world and theories that help further analyze. What I would like for anyone to derive out of these two stories is to let children be, you don’t make them wiser by shaming them into submitting to your ways. Nor does inducing anxiety lead to better choices. Choices, subjective as they already are, will morph and change as and when need arises, and most often the need of age decides that. So, I’ve gone from being that 13-year-old and 17-year-old, to my mythology loving 24-year-old self.

My first memory of thinking that mythology was “cool”, was way back in high school, we waded through a lot of hale-kannada poems during that time owing to the fact that my first language option through high school was Kannada. I had an incredible Kannada teacher, Pushpalata ma’am, it most definitely was the way she taught me Kannada that made me love it and excel in it. She also gave me the gift of mythology, albeit unknowingly.

We used to decipher hale-Kannada, an ancient counterpart to today’s existing language. Hale-Kannada, literally translates to old Kannada. I used to find great joy in comprehending something that was complicated, coded, my imagination would permit in those moments for me to be Robert Langdon, or even your everyday spy.  What hale-Kannada poems and proses have in abundance are mythologies, that’s mostly what they talk of, because in the olden days those were the stories told and eventually documented. What was also fun was to read a poem about Bhima beginning of the semester and then towards the end read a prose on Kurukshetra and Krishna, only for all the pieces to fall together and make this mega narrative.

As I moved on from these classes and headed away, in a couple of years, I chanced upon, “Shikandi”, by Devdutt Pattanaik. It armed classes that I was already participating in, which spoke of gender, sexuality, laws etc. A love that began for mythology and its varied interpretations has not found no end to this day. I’ve been asked time and again, “What is it that draws you to mythology? You aren’t even religious”, I understand that most of us have always been exposed to mythology through the lens of religion. It might be the root cause of people not wanting to interact with the subject. I was fortunate to always have seen it through the lens of narrative, storytelling and humanity.

Mythology, to me is a brilliant master class on complex storylines melding to make a mega narrative, how everyone had character growth and most of all human fallacies. Maybe because I wasn’t inducted into religion, when the narrative says god, he is as fantastical as Harry Potter to me. Both of them are told as people with powers that normal man cannot comprehend or obtain, but will admire all the same. So when gods or godlike characters – such as pretty much most of the royal lineage hits roadblocks, indulges, or commits fallacies, I can immediately relate to it as human nature.

Who hasn’t envied their siblings/cousins, listened to hearsay and started a fight, or cast away that which was different. That’s human nature to its core, that doesn’t change or get judged differently just because Ram goes through it. I have to admit, that another reason to ardently enjoy this genre has been because of all the perspectives that lend themselves to something that is considered ancient. Whether it’s Kavita Kane, Devdutt Pattanaik, Chitra Divakaruni Banerjee, or just my friend and I debating on it. It makes space for all those opinions and perspectives.

Mythology is far more secure than those who religiously celebrate it. Mythology is metaphorical, it is meant to be interpreted, it doesn’t wage modern human wars because opinions differ and because I didn’t add Sri/His Royal Highness before a godlike character’s name.

iThere are no comments

Begin typing your search above and press return to search. Press Esc to cancel.